I have a search component on Event record that looks up two sets of object records; Contact, and User.

I want to add some logic to the actions that differ when selecting a User and Contact record.

What I’ve built so far isn’t working, the EventRelation record gets created, but the Branch logic doesn’t seem to be working, or something related isn’t working…i’m not too sure. 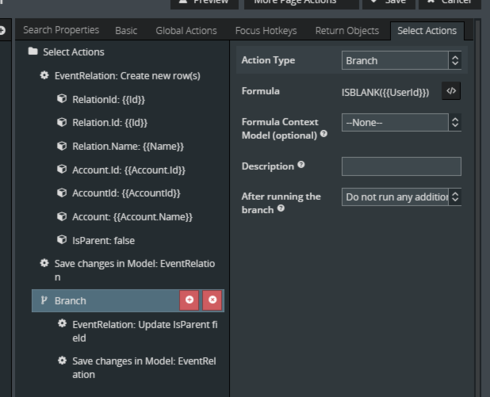 The branch logic should be checking if the UserId from the returned object is blank, if it’s blank then the IsParent field should be updated to TRUE.

I’d like to know what I am doing wrong, so this can be fixed? Or am I going to have to use two separate lookup fields, one for User records, the other for Contacts?

You could try nesting the logic.  Something like this I used in a SF formula which you can adapt:

Hope this helps you along.